After his journey from the separatist camp to mainstream politics, the chairman of the Jammu & Kahmir People’s Conference, Sajad Lone, is emerging as a third force in the Valley’s political landscape. Lone, who got a cabinet berth in the Peoples Democratic Party-Bharatiya Janata Party (PDP-BJP) coalition government from the BJP’s quota, spoke to Mir Ehsan about staking claim to form the government, the joint bid for power by the PDP, National Conference and Congress, and the impression that he is the BJP’s man in Kashmir. Edited excerpts:

Is your party ready for assembly elections now that the House has been dissolved?

You claimed that 18 legislators were with you while staking a claim to form the government. Since they are all ex-legislators now, will they join your party?

The process has already started with the joining of Imran Ansari. You will see with every passing day, many people will be joining us. Our party is going to be a blend of youth, experience and influential people on the ground so that we’re able to give a proper alternative and a distinctive alternative — not a repetitive alternative; something new.

Will you contest elections as the People’s Conference or as part of a third front?

There is no third front, it’s a third party. Whosoever will come, he will join the People’s Conference.

You claim to be fighting against the Abdullah and Mufti dynasties. Omar is a third-generation leader, Mehbooba is second generation. Aren’t you, too, from a political dynasty founded by your father Abdul Ghani Lone?

I feel humiliated when somebody calls me a dynast. It belittles not only my political struggle but my struggle to stay alive. The day my father died, the next day I found out from sources I have been named as chairman of the JK People’s Conference.

I pray that no son ever is ordained into politics in the manner that I was.

My father didn’t die of natural causes. He was killed, he wanted to live but he was killed, and the patrons of the killers still didn’t want me there.

They put all the pressure they could to ensure that I didn’t join. I took up the challenge, and since then it has been a struggle all through. It’s a fact that though my father was killed, it didn’t move the government, which was led at the time by Dr Farooq Abdullah, to give me security to go to the funeral.His own government representatives came and told me not to go there as we have reports that you might be killed too. They (government) gave me that news, but at the same time, said you will not get security to go there. What I have seen in past 15 years — out of which seven-eight years my father was in jail, I was in jail, I was interrogated, I have seen third-degree torture. Let God give them this sort of dynasty. I have been humiliated. They were calling me a joker, a loser, and a loner.

Are you worried that the NC and the PDP have joined hands to stop you?

Look what they doing on Twitter for last many days. Miss Mehbooba Mufti tweets sarcastically, without naming, a joke about me; Mr Omar Abdullah retweets. They are acting like kids and I enjoy this humiliation that they feel they are doing. It is good for me and I enjoy proving all of them wrong. I almost got the numbers. They were always making fun of me for the last seven-eight years. When I was not in the mainstream, they used to say he is very close to Indian agencies. When I joined the mainstream, they rushed to their patrons in Delhi and said he is very close (to people) across the border. I have gone through this grind. My father’s party wasn’t as big during his time. It was never as big as it has become big today.

The People’s Conference has a support base limited only to Handwara. How does that square with your ambition to be a state-level leader?

There are so many new people who are coming with us. What base did the Mufti family have when they started the PDP, or what base did the National Conference have in 1996? They were totally obliterated from the ground. In 1996, they gave them the election on the platter; 2002 was a semi-platter – it was not totally free and fair, as they would want us to believe.

Why is this tendency that even if whole world joins me, you say that you are confined to a particular area? Imran Ansari left the Peoples Democratic Party and joined us. It was because of him that the PDP was strong in many areas. It was because of Muzuffar Hussain Baig that they had something in Baramulla.

People who know that the People’s Conference is a rising party will join us. We are also going for a mass recruitment drive.

Do you think winning the mayoral election in Srinagar had some impact on Kashmir politics?

The mayoral election was totally a People’s Conference exercise. There were four Bharatiya Janata Party candidates who supported us, for which I am thankful.

The way they (NC-PDP) portrayed it, they had boycotted it, and there was the Congress.

It was a poor man’s election about day-to-day sanitation needs, day-to-day cleanliness needs. They made it secular versus communal, as if we were some great communalists out to finish off secularists.

It was one of the causes of panic, and certainly a trigger that forced the two dynasties to get together.

The two dynasties for last three decades have called each other the devil and accused each other of the worst crimes that anyone can possibly dream of. They got together to keep the third force away. Though they say they came together for the sanctity of Article 370, but all erosions came during the Congress and their time. This Congress is now the protector. This NC, which has been a party to erosions, or Mufti sahib while he was in the Congress was party to erosions, are now the new protectors. This politics of deceit has to go. I promise I will speak the truth — what I say in Delhi, I will say in Srinagar also. The pressing need is to tell the truth to our people, not to sell unattainable dreams. Not to make people delusional and drown in delusion, but to have attainable dreams.

The NC, Congress and PDP blamed you and the BJP for horse-trading of legislators. Is this true?

I have never been in power. It needs tons of money for horse-trading. Normally, money is associated with parties that are in power. I have been in a state of struggle for 16 years. Before that, my father was in a state of struggle. I have my own personal savings — I can’t gather money for horse-trading. If something pertains to money, it lies with two dynasties of the state.

Do you think governor Satya Pal Malik acted in haste by dissolving the assembly?

I think he should have given me a chance. We have accepted the decision but the PDP, NC and Congress seem to be angry. I invite them go to court, and if they go to court at least it will prove our numbers.

How sure are you of your acceptability in Hindu-majority Jammu, considering your separatist background?

In politics, everybody is not going to be with you.

There is a certain class to which I appeal, who inspire me and I am able to inspire them. They will come and vote for us. Whether I am acceptable to a certain region, time will tell depending upon number of seats we get.

What is your stand on article 35A and Article 370?

Both are non-negotiable and sacred for us. My father was assaulted on the premises of the assembly as a lawmaker by NC assembly members for raising questions pertaining to the special status of the state. And today we have to hear dictation and sermon from them.

You are seen as the BJP’s man in Kashmir? Isn’t that a liability considering the negative reaction the party evokes in the Valley?

If something sticks to me because of the BJP, more than me it sticks to Omar Abdullah who they made the poster boy of the NDA (National Democratic Alliance) regime as the first Kashmiri party to ally with them. More than me, it sticks to Mehbooba Mufti, who was chief minister in coalition with the BJP. I will go to the people and tell them what we mean. Whenever we have a tie-up with them, or had any truck with them, it was on matters pertaining to development. I was a small minister in that cabinet. 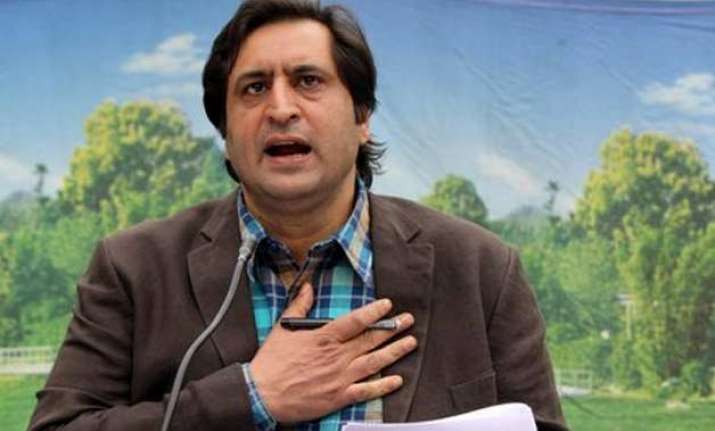 How will be your party different from National Conference and the Peoples Democratic Party?

If we come to power, we will handle governance differently. There is excessive centralisation of power, ignorance, outdated laws, and an ancient financial code. We will make structural interventions all through. On an ideological front, I will promise we will not be party to any erosion, what is already lost I can’t promise. I will not sign any erosion.

As far as violence is concerned, it is a very long, long battle. There are no short-term solutions and ultimate stability is a function of many factors, several of which are outside our hands.

The size of the assembly is much smaller than the contours of the problem. I am not going to come and say, give me vote for the assembly, and I will resolve it. My pitch will be based on based on truth and based on development.