The Cabinet Committee on Security (CCS) approved the procurement of the 36 Rafale jets well over a year after the Indo-French Joint Statement to acquire the aircraft “as quickly as possible” was issued, said a government note in the Supreme Court on the Rafale deal.

The Defence Procurement Procedure (DPP) 2013 mandates that acquisitions worth over ₹1,000 crore should be first cleared by the CCS.

Since 2002, over 1,100 contracts valued at ₹7.45 lakh crore were successfully concluded using the DPP structure, introduced after the Kargil War.

The note, submitted earlier to the court and made public on Monday as per a court order of October 31, claimed that DPP 2013 was “completely followed.”

The document showed that the CCS approved the signing of the Inter-Governmental Agreement (IGA) for procurement of the 36 jets only on August 24, 2016 — well over a year after the Indo-French statement of April 10, 2015, which the note said conveyed an “intent” to acquire the jets in a fly-away condition.

The approval of the Defence Acquisition Council (DAC), the highest body for defence procurement, was taken on May 13, 2015. Again, a month after the Indo-French statement.

The government said the DAC approval was taken “as stipulated in the DPP.”

The note said the joint statement was issued after the Government of India conveyed to the French government about the “critical operational necessity” for Multi-role Combat Aircraft for the Air Force. This necessity, it said, was triggered by the “extremely critical” combat potential of the Air Force caused by a three-year stalemate.

The situation was due to “unresolved issues” over man-hours and contractual obligations between HAL and Dassault Aviation over the production of 108 Rafale jets, of a total 126, to be inducted in the Air Force as part of an earlier proposal.

The government said the prolonged impasse over the 126-aircraft deal had caused an “urgent need” to acquire 36 Rafale jets or two squadrons in a fly-away condition. 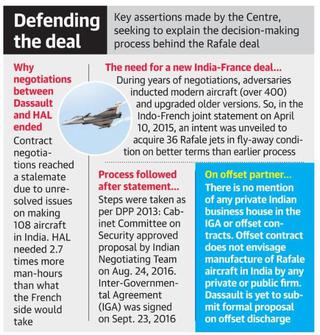 The note said an Indian Negotiating Team (INT) was constituted after the joint statement was signed in April 2015. The INT led by the Deputy Chief of Air Staff held 74 meetings with the French for a year on various aspects like pricing, delivery schedule, maintenance terms, offset, and IGA terms.

According to the note, the INT, which submitted its report on August 4, 2016, “indicated better terms and conditions arrived at as a result of negotiation as compared to 126 MMRCA (Medium Multi Role Combat Aircraft) case…”

The INT had recommended CCS approval and signing of the IGA on the 36 jets. After due consultations with the ministries of finance and law, the proposal was placed before the CCS on August 24, 2016. The CCS approval for signing the IGA for the 36 jets was given the same day. Finally, the IGA was signed by the Indian and French defence ministers on September 23, 2016.

On the question of an Indian offset partner, the government said, “There is no mention of any private Indian Business house in the IGA or the offset contract.”

“The offset contract does not envisage manufacture of 36 Rafale aircraft in India by any public or private sector firm,” it said.

The note echoed a clarification put out by the Ministry of Defence on September 22, 2018 against “unnecessary controversies” regarding a statement purportedly made by former French President Francois Hollande on the selection of Reliance Defence as offset partner by Dassault.

No one more devoted to the idea of a united India than Farooq Abdullah:...

‘If anybody in BJP can admonish me, it’s Tai’: PM Modi on Sumitra Mahajan